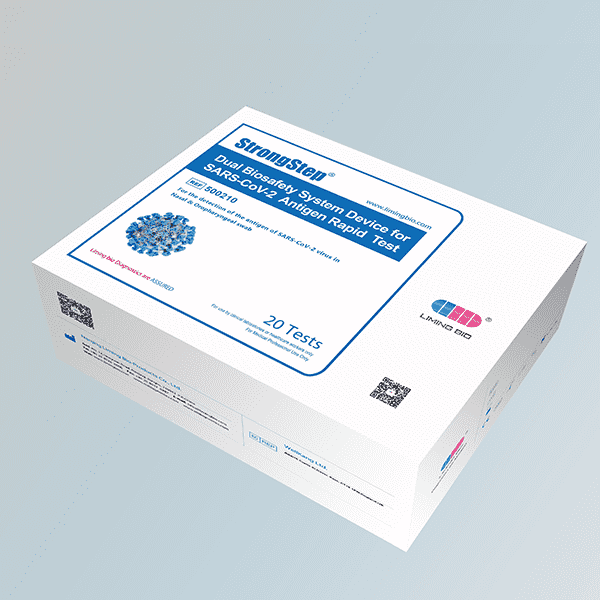 INTENDED USE
The StrongStep® Procalcitonin Test is a rapid immune-chromatographic assay for the semi-quantitative detection of Procalcitonin in human serum or plasma. It is used for diagnosing and controlling the treatment of severe, bacterial infection and sepsis.

INTRODUCTION
Procalcitonin(PCT) is a small protein that comprises 116 amino acid residues with a molecular weight of approximately 13 kDa which was first described by Moullec et al. in 1984. PCT is produced normally in C-cells of the thyroid glands. In 1993, the elevated level of PCT in patients with a system infection of bacterial origin was reported and PCT is now considered to be the main marker of disorders accompanied by systemic inflammation and sepsis. The diagnostic value of PCT is important due to the close correlation between PCT concentration and the severity of inflammation. It was shown that "inflammatory" PCT is not produced in C-cells. Cells of neuroendocrine origin are presumably the source of PCT during inflammation.

PRINCIPLE
The StrongStep® Procalcitonin Rapid Test detects Procalcitonin through visual interpretation of color development on the internal strip. Procalcitonin monoclonal antibody is immobilized on the test region of the membrane. During testing, the specimen reacts with monoclonal anti-Procalcitonin antibodies conjugated to colored particles and precoated onto the conjugate pad of the test. The mixture then migrates through the membrane by capillary action and interacts with reagents on the membrane. If there are sufficient Procalcitonin in the specimen, a colored band will form at the test region of the membrane. The presence of this colored band indicates a positive result, while its absence indicates a negative result. The appearance of a colored band at the control region serves as a procedural control, indicating that the proper volume of specimen has been added and membrane wicking has occurred. A distinct color development in the test line region(T) indicates a positive result whereas the amount of Procalcitonin can be assessed semi-quantitatively by comparison of the test line intensity to the reference line intensities on the interpretation card. The absence of a colored line in the test line region(T) suggests a negative result.

PRECAUTIONS
This kit is for IN VITRO diagnostic use only.
■ Read the instructions carefully before performing the test.
■ This product does not contain any human source materials.
■ Do not use kit contents after the expiration date.
■ Handle all specimens as potentially infectious.
■ Follow standard Lab procedure and biosafety guidelines for handling and disposal of potentially infective material. When the assay procedure is complete, dispose specimens after autoclaving them at 121℃ for at least 20 min. Alternatively, they can be treated with 0.5% Sodium Hypochlorite for hours before disposal.
■ Do not pipette reagent by mouth and no smoking or eating whileperforming assays.
■ Wear gloves during the whole procedure.

Instructions
Write your message here and send it to us